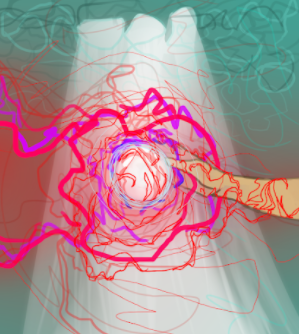 As humans, we have built our societies around the idea of more, “reaching for the stars,” “going for the gold,” always striving, achieving, acquiring. We often don’t know when to stop, even if warning signs blink frantically for our attention. We think we have lost if we settle for less in a world where only more is more and the most is the best. But how much is actually enough? What do we really need? How can we re-program ourselves to live with gratitude for the simple things we already have? These are some of the questions elicited by Steinbeck’s novella, The Pearl.

After their brush house is burned and their canoe destroyed, Kino and Juana flee their village and find themselves pitted against against nature — the same nature that had given them everything they needed in their “other” life.

As demonstrated by a cluster of ants, Kino puts his foot as an obstacle in the ants’ path and watches as they simply march right over him. This symbolism reveals that Kino can not manipulate or rule over nature to suit his desires because nature will defeat him every single time.

Kino is finally able to see the reality of the pearl, when he gazes into its crystal ball-like surface and actually acknowledges what his actions have wrought: a dead man, an assaulted wife, and a sick child. We noted, however, that he continues to blame the pearl, rather than take self-inventory and face the consequences of his own deeds and omissions.

In the final scenes of The Pearl, Steinbeck presents a watering hole as both a “place of life” and “place of death,” because it offers a resource but also creates competition between animals (and human animals) for the riches there. Much like the pearl, itself, it is a paradox in that we all depend on and complete for the materials needed for  survival.

Our class was divided on the question of whether Kino’s decision to throw the pearl back into the ocean represents a victory or a defeat. Some thought that Kino’s final act of returning the pearl to nature empowered him, although it will ultimately enslave him in a life of poverty. Others argued that Kino only adds to his tragedy and makes Coyotito’s death all for nothing. Both viewpoints have value in this story of difficult questions and even more difficult answers. Perhaps the best answer is to recognize your friends and family as the most precious pearls you will ever need.

For our final project for The Pearl, students chose a moment of impact and completed a self-designed project that allowed them to focus on a number of creative outlets such as the use of illustrations/art, creative writing, research and/or technology. Some project included, but were not limited to fine art paintings, cartoons, sculptures, dioramas, computer animated short films, standard essays exploring a thesis of choice, research papers/PowerPoints, TED talks on systemic racism/oppression, political corruption or other topic generated by the novella.

Please click on the link below to see just some of our projects!